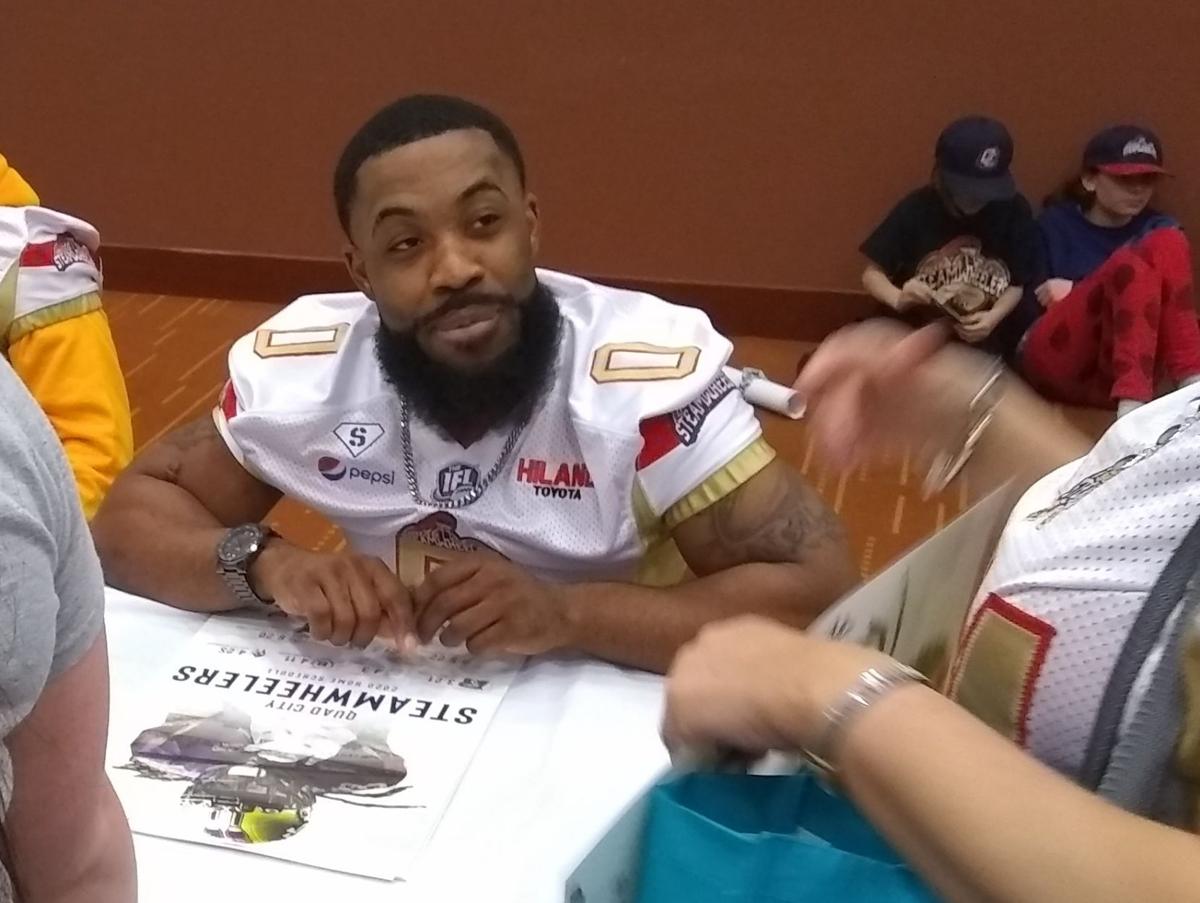 Former Rock Island star Amos Johnson chats with fans Sunday, March 1, at the Quad City Steamwheelers' preseason party. After playing just one game the season ended for the Steamwheelers, along with the rest of the league, because of the COVID-19 pandemic. 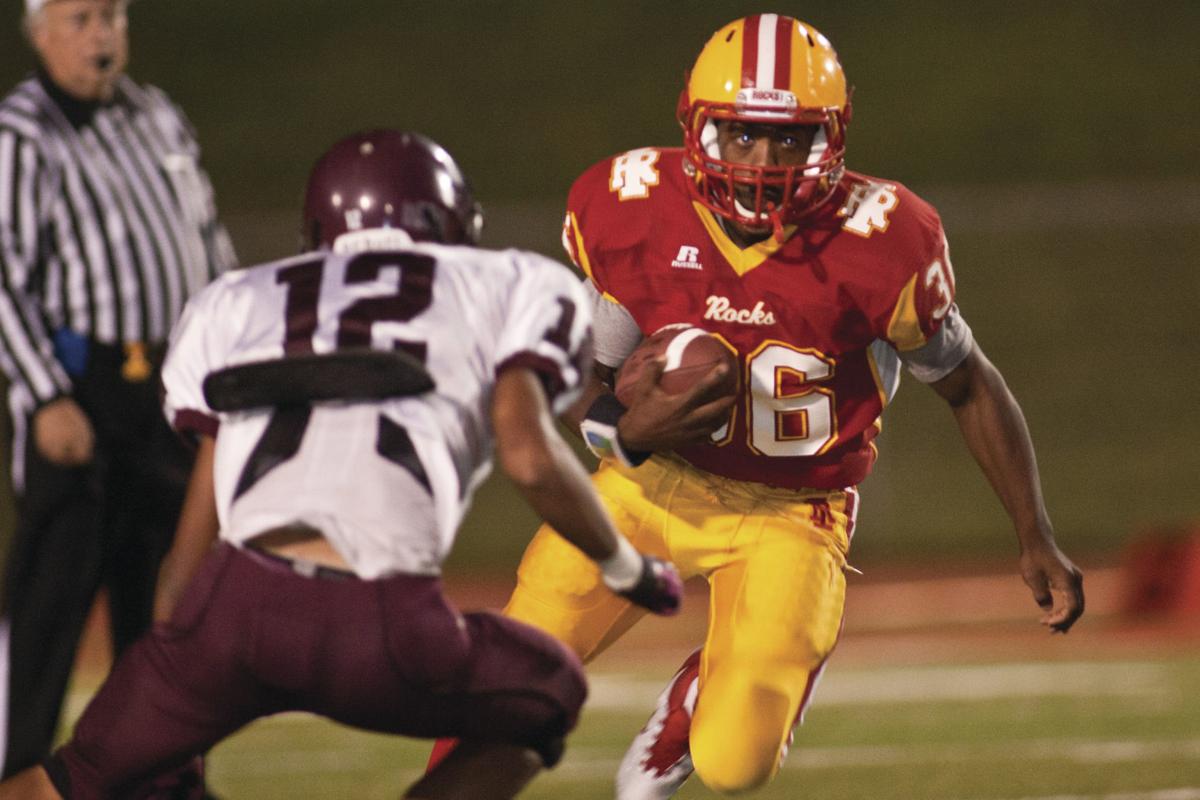 Rock Island's Amos Johnson carries the ball against Moline in a 2012 game. Johnson has landed a roster spot this season with the Quad City Steamwheelers.

The Quad City Steamwheelers will take the field for their Indoor Football League opener on Saturday night with about half of their 25-man roster comprised of players who were with the team last season.

But, as always, they will have a few players who are complete newbies to the indoor game. A few of them may not have even seen an indoor game before they play in their first one.

You can count Amos Johnson in that group

The former Rock Island High School and William Penn University star has been competing for the starting running back job with the Wheelers and will see his first action when QC takes on the Cedar Rapids River Kings at the U.S. Cellular Center.

"I’m slowly but surely getting the hang of it," Johnson said of indoor football. "It’s a lot faster paced game so I’m trying to adjust to it."

At both Rocky, where he was an All-Western Big 6 Conference and All-Metro selection, and at William Penn, Johnson was a fullback in totally run-oriented attacks. Although he rushed for 2,381 yards and scored 21 touchdowns in four seasons of college ball, he never caught a single pass.

"We ran the triple option and I was a fullback so it was all run for me," he said. "I didn’t run too many routes."

Needless to say, the IFL is much different.

"It’s more of a passing league than a running league, but I’m adjusting," he said. "Football is football at the end of the day so I’m just trying to adjust and learn the game."

Johnson graduated from William Penn in December 2018 and spent about six months working out and going to tryout camps for the NFL, CFL and other leagues.

He moved back to the Quad-Cities in August and continued to seek out playing opportunities while working at UPS and the Finish Line. When he saw the Steamwheelers were holding tryouts, he decided to give it a try.

Head coach Cory Ross has been impressed enough with Johnson’s speed and power to give him a roster spot. The 24-year-old has been competing with former St. Francis (Pa.) star Marcus Bagley for the starting job although Ross admitted that Bagley, who is bigger and more experienced, has the edge going into the season.

"But Amos is very smart," Ross added. "He has been picking this up very quickly."

Both backs will be part of an offense that figures to be one of the best in the IFL. Quarterback E.J. Hilliard was the league’s offensive player of the year last season and receivers Keyvan Rudd and Quinton Pedroza both made first-team All-IFL for a team that finished 6-8. The Wheelers have added even more quality receivers, too, including J.T. Stokes and Tre Harvey.

Cedar Rapids is coming off a 1-13 season that finished with 11 consecutive losses. It was shut out in two of its last three games.

The River Kings have brought in a new coach in Victor Mann, a former All-Big 12 running back at Kansas State. They also have a new quarterback in Derrick Bernard, a former minor league baseball pitcher who was rookie of the year and offensive player of the year with the Omaha Beef in Champions Indoor Football.

Be the first to know

Get local news delivered to your inbox!

Former Rock Island star Amos Johnson chats with fans Sunday, March 1, at the Quad City Steamwheelers' preseason party. After playing just one game the season ended for the Steamwheelers, along with the rest of the league, because of the COVID-19 pandemic.

Rock Island's Amos Johnson carries the ball against Moline in a 2012 game. Johnson has landed a roster spot this season with the Quad City Steamwheelers. 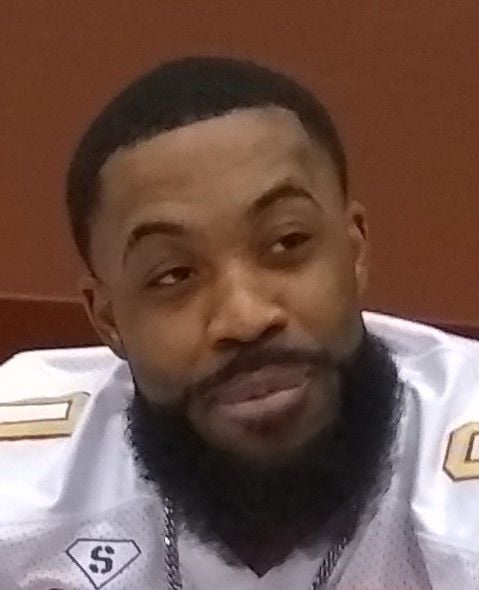