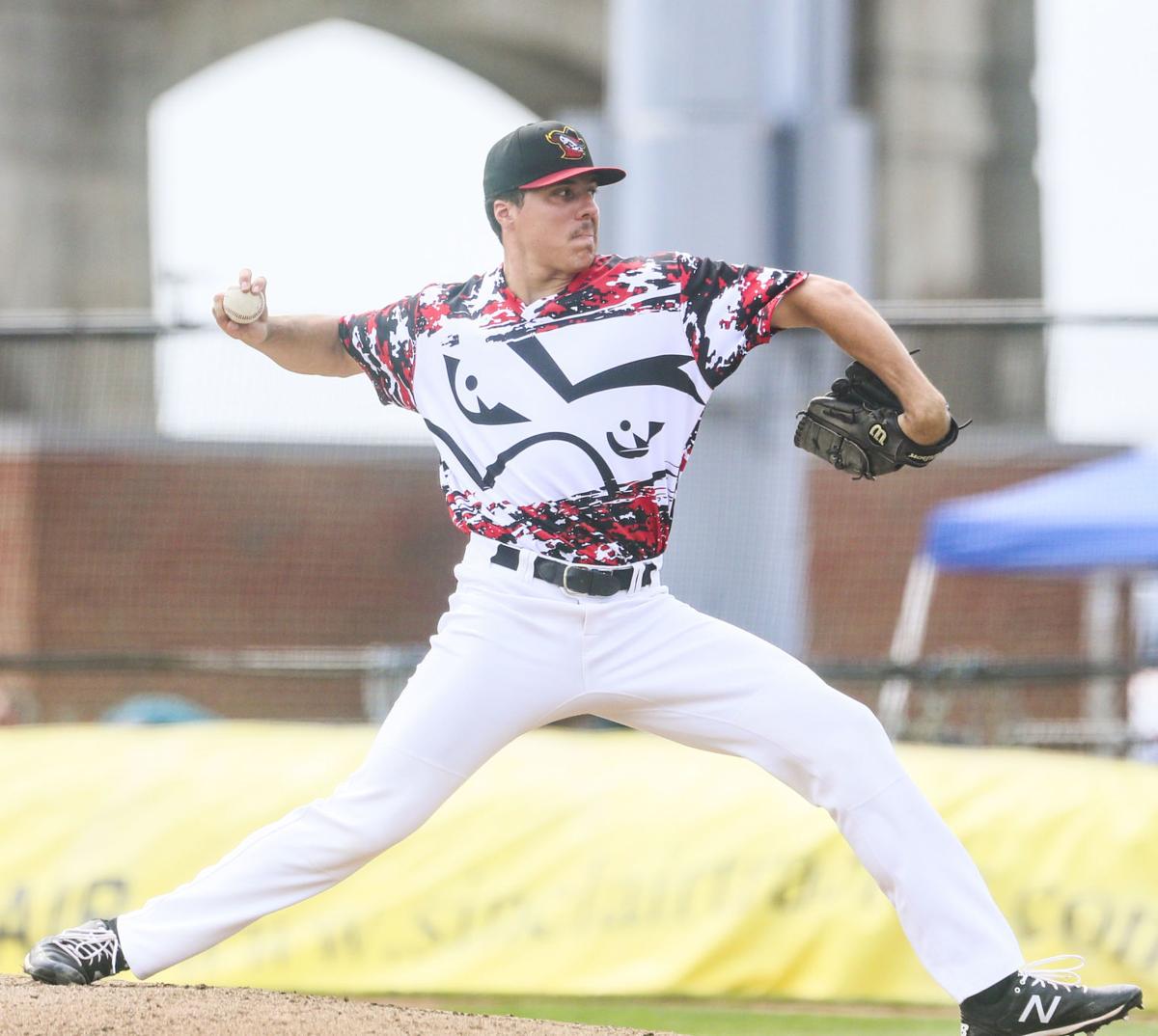 Quad Cities River Bandits' starting pitcher Christian Cosby (35) delivers a pitch to a Peoria Chiefs batter during Sunday's game at Modern Woodmen Park in Davenport. Cosby pitched well, but was out of the game before QC's offense exploded in what turned out to be an 8-3 victory. 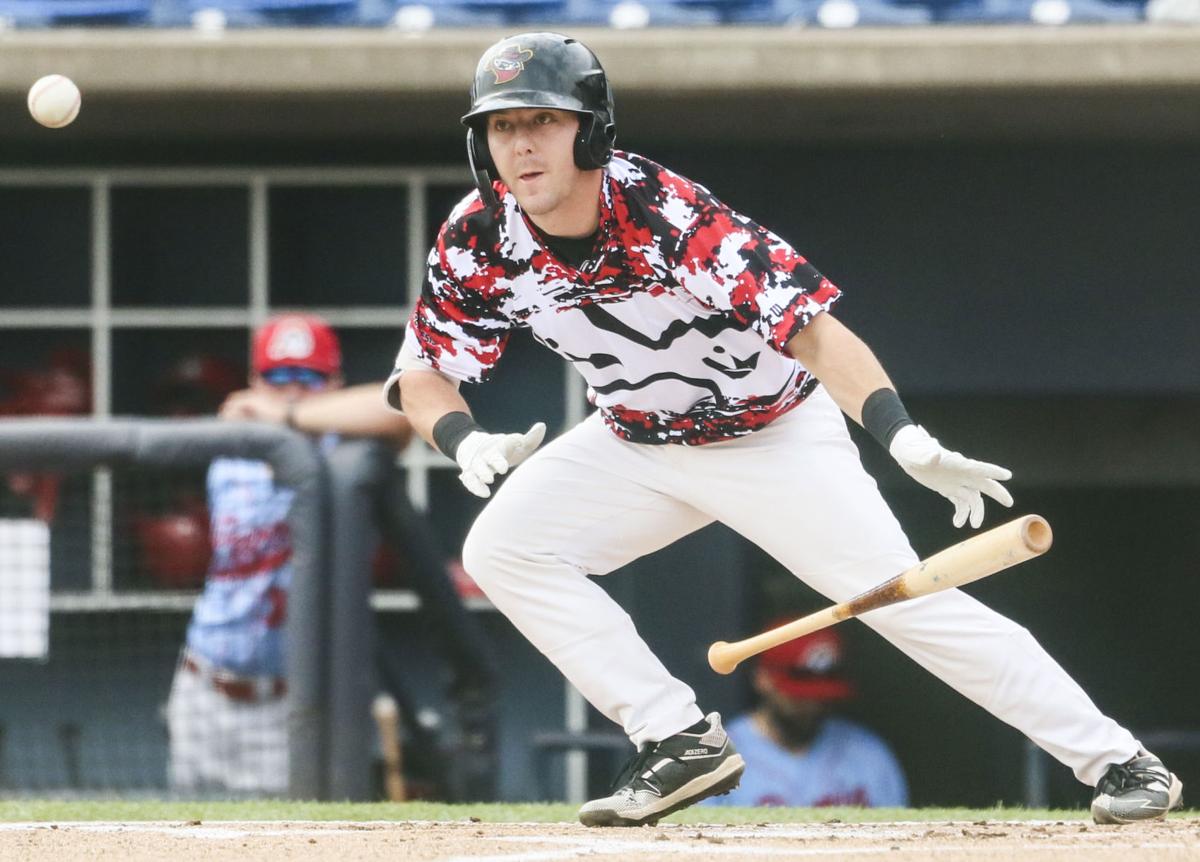 Quad Cities River Bandits' Tucker Bradley (22) attempted to lay down a bunt during Sunday's 8-3 victory over the Peoria Chiefs at Modern Woodmen Park in Davenport.

“Things felt good. I was just waiting for the offense to pick me up like the always do,’’ Cosby said.

That came one-third of an inning too late for the Quad Cities right hander who retired 13 Chiefs in a row to put the River Bandits in a spot to rally for an 8-3 win over Peoria and a split of the six-game High A Central League series.

Quad Cities collected seven of its runs on four hits in the deciding sixth inning, sending 12 batters to the plate and taking advantage of four walks and a hit batter to overcome a 3-1 deficit.

“We had some help but we’ll take it,’’ River Bandits manager Chris Widger said. “We weren’t swinging the bats well early, but we did find ways to get on base. We kept working, which is what you want to see.’’

John Rave drew a bases-loaded walk to score the River Bandits’ first run of the inning before Quad Cities tied the game when Nathan Eaton was struck by a pitch with the bases full.

Another walk allowed Parker Bates to collect the go-ahead RBI before Will Hancock broke open the game with a line-hugging two-run double to right.

A groundout by Mikael Garcia brought home the sixth run of the inning before Tucker Bradley drove a run-scoring single to right to give Quad Cities a five-run lead.

The big inning allowed Mitch Ellis to earn his team-leading eighth win as he combined with Caden Monke to limit the Chiefs to two singles over the final 3.1 innings of work in relief of a solid start by Cosby.

“Cosby really set a tone for us, left one pitch up but had a nice start that gave us a chance,’’ Widger said.

That was what Cosby hoped for, scattering four hits and striking out seven batters over 5.2 walk-free innings of work.

“You get a good pace going and you look up and all of a sudden you’re in the sixth inning,’’ Cosby said of the stretch of 13 consecutive outs recorded between the first and fifth innings. “The guys who followed up just kept it going. With the playoffs coming up, that’s the type of momentum you want.’’

The trio of pitchers limited the Chiefs to six hits, allowing the River Bandits to close out the series with a pair of victories.

“It was good to come back and get the series split,’’ Widger said. “In reality, it’s just a number on paper, but we haven’t lost a series at home so far this season and the guys do take some pride in that.’’

Nick Loftin led Quad Cities (73-39) with three hits, including an infield single in the first inning that scored Garcia and erased an early 1-0 deficit.

Jordan Walker drove in all three of Peoria’s runs with two swings of the bat.

The Cardinals’ first-round pick in the 2020 draft homered twice, giving the Chiefs a 1-0 lead in the first inning and a 3-1 edge with a two-run blast to center in the top of the sixth inning before the River Bandits rallied.

Walker has homered seven times since joining Peoria on June 28, with six coming off of Quad Cities pitchers during games at Modern Woodmen Park.

A 13th-round selection of the Royals from Alabama-Birmingham in the 2019 draft, Tolbert hit .228 in 80 games for the Fireflies. He led Columbia with seven triples and 49 stolen bases before being promoted.

Playoff tickets: Tickets for the River Bandits' first home game in the High A Central League Championship Series on Friday, Sept. 24 will go on sale at 10 a.m. on Tuesday.

After opening postseason play on the road in the best-of-five series, Quad Cities will host the third, and if necessary fourth and fifth games, of the title series.

All playoff games at Modern Woodmen Park will begin at 6:30 p.m. and tickets can be ordered at riverbandits.com or at the River Bandits box.

Opinion: Sean Payton's last season with the Saints was a success

Opinion: Sean Payton's last season with the Saints was a success

Get the latest baseball news delivered to you!

Sign up to receive professional baseball news in your inbox every week.

Before cutting into a cake to celebrate his birthday Friday, Quad Cities River Bandits owner Dave Heller signed a check for $40,000 to help pr…

A new manager will be filling out the Quad Cities River Bandits lineup card during the 2022 season.

Quad Cities River Bandits' starting pitcher Christian Cosby (35) delivers a pitch to a Peoria Chiefs batter during Sunday's game at Modern Woodmen Park in Davenport. Cosby pitched well, but was out of the game before QC's offense exploded in what turned out to be an 8-3 victory.

Quad Cities River Bandits' Tucker Bradley (22) attempted to lay down a bunt during Sunday's 8-3 victory over the Peoria Chiefs at Modern Woodmen Park in Davenport.